“If I could go back in time, I would tell myself to spend more time learning to code in high school. I had a lot of learning to do getting up to speed with C++ . I could have made this easier on myself if I would have taken some classes earlier on.”

Who or what inspired your career in tech?
What inspired my career in tech was “Take Your Kid to Work Day.”  As a kid, I had the chance to go to work with my dad who worked at a medical manufacturing company that made precision components. I remember being fascinated by all the CNC machines, mills and little parts that had to be produced with sub millimeter accuracy.  I really wanted to know how something represented by a three view drawing on a piece of paper could be made by a machine out of metal. It was the coolest thing ever to watch pass after pass of material being taken away to produce a part that formally existed only in CAD land. I remember sitting at the kitchen table looking at old style printer paper with engineering calculations and drawings as my dad tried to come up with a manufacturing plan to make some new type of medical component. If I could sum up why I became an engineer in one sentence it would be, “I became an engineer to figure out how things work.” I like to ask why.  I have a very curious mind and engineering provides the tools to satisfy that curiosity.

What’s been your best hack ever?
Learning to step back, take a break, and put things in perspective. Between being a grad student and my internship, I don’t have as much of a personal life as I would like. I can be a very goal-oriented person and can get so focused on the problem or task at hand that I loose sight of the bigger picture. When this happens or I feel myself getting tunnel vision, I know it’s time to step away and go do something fun or mindless.

My best ideas always come during a run or hike. It’s amazing how something as common as a boat trailer or a tree can hold the key to solving some problem you have spent hours thinking about. I am all for working hard. I love a good deadline and some lofty requirements, but knowing when to step back and take a break is invaluable. If you don’t guard your time and take care of yourself, you can get burned out quickly.

What has been your greatest career challenge?
My greatest career challenge has been my trip to Africa to work on a fanning mill that I created with a senior mechanical engineering design team. The fanning mill was part of a Gates Foundation grant that Iowa State University was awarded to study soybean production in rural Africa. The project was a three-year long challenge that started out in ME 415 Senior Design class.  I was selected as the team manager.  We were behind from the start since our project was changed by our sponsor a fourth of the way through the semester. We were short on time and had a long list of customer requirements. Not only did the sponsor want a prototype machine but they also wanted a well-documented manufacturing process that could be taken overseas and implemented immediately.

After delivering the machine and manufacturing process, I was selected to go over seas to Uganda and actually work with the manufacturer to get production going on the machine. Plans were sent and specs were hammered out. When I arrived in Uganda, only one machine out of six had been built. Not only did I get to test the machine in an environment where I had never been before, but I had the pleasure of trying to make and justify design decisions to people who’s first language was not English and who were not used to taking direction from a woman.

After my first trip to Africa, a design was decided on and a batch of 16 machines were produced. These machines were then sent to farmers in rural Uganda who tested them for a year. I had the chance to go back after the farmers had used the machines to check up on them and provide care instructions. I learned a lot about patience and how sometimes it’s just better to step back and let people fail before you jump in to help. While performing maintenance on these machines, I had men come and grab wrenches out of my hands and try to “fix” the machine themselves. All I could do is stand there and wait until they were ready for my help.  I’ve learned to just keep hammering away at the things I can control and to do my job well.

What is your biggest career success to date?
My biggest career success to date would be my Master’s degree in Mechanical Engineering and Human Computer Interaction. I was the first person in my family to attend college and my parents stopped being able to help with homework when I was in the fifth grade. My career is a testament to the power of tenacity and pushing though challenges. I’ve had to work hard at math and I struggled though physics. Sometimes I still can’t believe that I have a Master’s degree in engineering. It’s pretty cool.

Who are your role models?
My biggest role model is my major professor. Coming from the passive-aggressive capital of the world, Minnesota, I greatly appreciate his “tell it like it is” mentality. He is forthcoming and doesn’t tiptoe around anything. He also is one of the best salesmen I know. His ability to frame situations based on the information available and his target audience is quite impressive.

If you could go back in time, what’s one tip you’d give your teenage self?
I would tell myself to spend more time learning to code in high school. As an undergrad coming in to mechanical engineering I wanted nothing to do with computer programming. Now my research and my internship are heavily based in programming, and I kind of like it that way. There’s nothing like jumping from designing something in SolidWorks to programming a neural network. Variety it’s the spice of life. Plus I get bored easily!  While I managed to build some programming skills, I had a lot of learning to do getting up to speed with C++ (one of the harder languages). I could have made this easier on myself if I would have taken some classes earlier on. 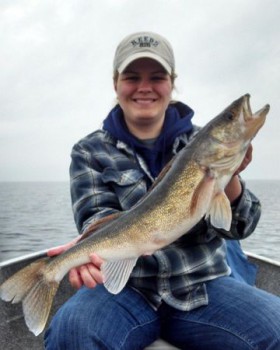 What do you do when you’re not kicking butt at work?
What I enjoy most of all is spending time outside. I love hiking and fishing. The further away from civilization I can get the better. The best vacation spot ever is Lake of the Woods in Canada– walleye fishing!

Flats, heels or kicks?
Business setting heels for sure. I can use the extra height. Everywhere else just give me a pair of Merrills and I’m a happy camper!

Best career advice book?
Hmmm career advice book, I’ve never actually read one. This could come across a little conceited but I’m not a huge fan of reading self help or” follow this path” type books. I would rather go out and try a bunch of actions or observe rather than spend time reading. When dealing with careers, I’ve learned that not advice is “one size fits all, and can be described or quantified in a book. Books out there on how to be like Steve Jobs or Bill Gates can contain helpful insights, but to be successful you just have to “be you.” What makes people visionaries is that they don’t care about being visionaries; they just do what works for them and they let everyone else talk about how forward-thinking they are.

Who are the women in tech that you most admire and why?
Marissa Mayer. She jumped from a safe position at Google, a stable and rising company, to a struggling Yahoo. I admire her for taking on a challenge and running things her way. When you become complacent and okay with playing it safe and not taking risks, stagnation occurs. It’s important to keep pushing forward and looking for new challenges and adventures, otherwise you go the way of Kodak– a company that failed to innovate and died with physical copies of photos.