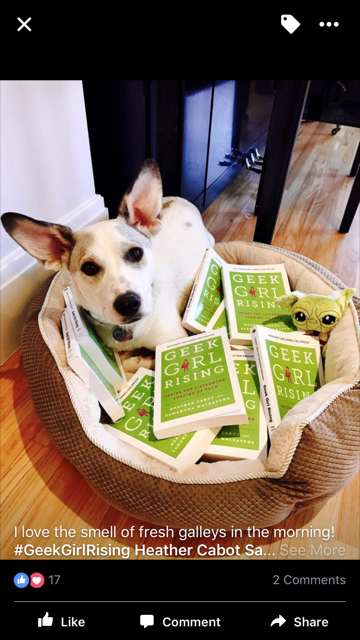 We’ve made our final fact checking calls. Pored over pages and pages of proofs. Turned in the final edits. And now it’s go time for Geek Girl Rising. It’s been two years since we actually sat down and wrote up the book proposal (essentially the architecture of the book); edited and re-edited it; sat on pins and needles as we received disappointing rejections and then our hearts soared when we received multiple offers; accepted our book deal from a top NYC publisher – St. Martin’s Press; embarked on the journey of filling in all of the details laid out in our book proposal outline; tracked and trailed Geek Girls all over the country and the world from San Francisco to Boston to PIttsburgh to Atlanta to Los Angeles to London and on and on; sat for hours on end in the library and at the kitchen counter on nights and weekends pulling all of those hundreds of interview transcripts together into an entertaining narrative; edited and re-edited; and now, here we are.

We could not be more excited about the months ahead.  Publication date is May 23, 2017.  The experience of holding a finished advance review copy in our hands, seeing the font the publisher chose along with the layout and the beautiful cover was a feeling like none other.

We have been blown away by the early response. We have immense gratitude for the super women who contributed such beautiful praise. Thank you Arianna Huffington and Joanna Coles!  We’ve been honored to speak at Tech Inclusion, Women of New York and a private reading in the Hearst Tower.  Up next, our book talk at SXSW on Monday, March 13th. The fun is just beginning and we are so excited for the journey ahead.  Please let us know if you would like us to visit your company or hometown bookstore.

Thank you for all of your support. Onward and upward, Geek Girls.

We checked out the new “Invention Mansion,” the product Sterling calls the “anti-dollhouse” and the top secret project she and her team were working on all last year. The play set features more than 300 pieces that girls can reconfigure in hundreds of different ways like turning ladders into bridges and doors into platforms. And it features a “Hacker Hideaway” where the characters Goldie and Ruby and code and create.

Walking the show with Debbie was especially cool because we saw so many of the toys that have followed in the footsteps of GoldieBlox and Debbie’s Kickstarter campaign.  Back when she first came up with the idea for GoldieBlox, the tech toy section at Toy Fair was a wasteland, Sterling told us. Now she points out, nearly every booth features STEM, robots and a lot of the products are centered around girls.

“I think I knew that there was such a huge gap when I started GoldieBlox that it seemed like a no-brainer. I think we have helped validate the market,” she says with a smile.

And as the category rapidly grows, the Toy Industry Association, which sponsors the trade show, predicts STEAM toys (those that reinforce science, tech, engineering, the arts and math) will be among the top sellers next holiday season.  On our walk around the exhibit hall, we especially liked Tinkineer and its maker kits for children aged 10 and up called “Marbelocity.”  The sets introduce kids and adults to physics and engineering principles through Rube Goldberg-like machines and a graphic novella featuring the characters known as “Tinkineers.”  And if your daughter likes to make movies on her mobile device, check out Stikbots. They are action figures that mimic human movements to be used with an app that teaches kids how to make stop motion animated movies and includes a community for them to share their creations. Finally, we saw lots of female action figures with all kinds of empowering messages including I Am Elemental, a collection of heroines started by two moms in 2014. The toys promote virtues like courage and wisdom and are intended to
re-cast the traditional female action figure into a strong, smart leading role in children’s imaginary play.