Years in industry? 4
I started interning in technology during my freshman year at Columbia, even before I was a computer science major. I worked at Timehop in New York, and then did two software engineering internships at Google over the past two summers.

Who or what inspired your career in tech?
When I was in high school, I was dead set on studying political science or international relations, going into politics and becoming a diplomat (and a senator, when I was feeling ambitious). When I got to college, I was still planning on being a political science major, but since I was from the Bay Area, I figured I’d at least try to take a “computer science-y” type class to fulfill my quantitative science requirement. I’d never done any coding before, neither of my parents worked in tech, and I was emphatically “not a math person.” I hated calculus and one of the reasons I was super excited about Columbia was that there was no math requirement. So freshman year I tried to get into the most basic class computer science class for non-CS majors–“Introduction to Information Science.” This class conflicted with one of my required classes, so I signed up for Intro to CS in Java instead, which was the introductory class for majors. I kept waiting for the professor to start talking about really difficult math, or something else that was just at genius level that I could never hope to understand. But that didn’t happen. It was a hard class, and I did not do as well as I was used to doing, but it was all doable and it was heavily based in logic, which I liked. Programming was fun, and I felt like I was learning a lot. But I was not at all convinced that it was the thing for me. I didn’t feel “naturally good at it” by any means.

Winter break of freshman year, I went home to Palo Alto and happened to go to hear Marissa Mayer, who was then still at Google, speak at the Computer History Museum. I thought it was so cool that she’d majored in Symbolic Systems at Stanford, which is like a combination of computer science, linguistics and artificial intelligence. She wasn’t just a pure math major or anything, which is what I’d really thought computer science was all about. I remember just being really impressed at the way she clearly was so amazingly good at breaking down huge, complex problems and talking about them in a very matter-of-fact, comprehensible way. That was one of the things I’d liked about CS at first, too: you could methodically divide up the work that your program was doing in ways that made sense to you – you had so much control, and it was all about making difficult things easy by breaking them up into smaller tasks. I went up and talked to her afterwards about my first CS class, and I don’t even remember what she said to me, but when I was walking away, this elderly man came up to me and said, “You had the same sparkle in your eyes as her when you were talking about coding.” I figured I could take at least one more CS class.

I started to meet people that I liked a lot in my next CS class, and that was really key – I felt like these were people I could see myself hanging out with. I took a few more classes. Finally, I was dithering over what to declare as my major – I thought I might do Information Science, which allows you do take some CS and some statistics, and apply it to another field, like political science. One of my friends was a senior and just a stunningly talented computer scientist – he’d been programming since elementary school, was the only person to do a thesis in computer science and became the first person from Columbia to receive a Churchill Scholarship to continue his studies at Cambridge – and he exasperatedly said, “Just study computer science, you’ll be a lot cooler.” It was really important to have someone I respected tell me I was supposed to be there. I kept taking classes, met more awesome people, got involved with Columbia Women in Computer Science, went to the Grace Hopper celebration of Women in Computing, did a few awesome internships, and here I am! 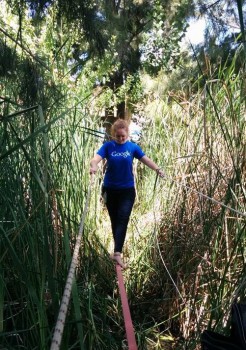 What’s been your best career or life “hack” ever?
It’s funny – in tech, a hack is something you make at a hackathon, a “quick and dirty” program or app that does something cool but isn’t polished at all. I’ve done my fair share of those.  But in terms of something that’s helped me get through some tough places in school and work, one mantra is that it’s OK if it’s hard. In computer science, there’s such a culture of the “genius programmer” that everyone thinks that the work is so easy for everyone but them. This is called “imposter syndrome,” when you say to yourself– “Everyone around me knows what they’re doing, I have no idea what I’m doing, and when they find out that I have no idea what I’m doing, I’ll be exposed as a fraud. Sure, I did that one thing, but I’m just one step away from total failure, and then everyone will see that I’m really not cut out for this.” This has been one of the most important phenomena I’ve ever learned about. It’s OK if this is hard. You’re supposed to keep trying and working on it. People think that if they don’t get something immediately, computer science is not for them, and they’re not cut out for it. This is the biggest misconception in the tech world. I loved the recent post by Amy Nguyen called “I need more terrible female engineers.”  The only question you should have to ask yourself when deciding if you belong in CS is, “Do I like it?” If you really do, then you belong here.

What has been your greatest career challenge?
My biggest career challenge has probably been choosing this career. I was really worried that I would be giving up all the things I loved about history and political science and making a difference in the world if I “sold out” and became a CS major. But there’s a lot of good work starting to be done with computer science for social impact where tech can be used as a force for good – providing information on the closest shelter and food for victims of natural disasters, crowdsourcing information about corruption at truck checkpoints in West Africa, making medical information more accessible to those in remote areas and connecting protestors in the Baltimore uprising, to name a few great examples. I’m starting work as a software engineer for Google Social Impact where I’ll be using the massive resources of Google to try to help solve major problems for the 61% of people in the world who don’t have access to the Internet and the 99.999999% of people in the world who don’t live in Silicon Valley.

What is your biggest career success to date?
Convincing several awesome freshwomen at Columbia to become computer science majors!

Who are your role models?
My parents for their deep consideration of important issues and sharing that value with me and my brother; the awesome women PhDs and older undergrads in computer science who made me feel welcome at Columbia; Julia Hirschberg, head of the Columbia Computer Science department, who was a history professor before she was a Computer Science professor; Jocelyn Goldfein, engineering manager at Facebook; Megan Smith, former head of Google X and current CTO of the U.S.; Mikey Dickerson, the current head of the United States Digital Service, also known as the guy who fixed Healthcare.gov; Elizabeth Warren; DeRay Mckesson (@deray) and Johnetta Elzie (@nettaaaaaaaa), two of the best communicators, activists and news sources about uprisings against police brutality and racism in America.

If you could go back in time, what’s one tip you’d give your teenage self?
I’ve only been “not-a-teenager” for two years, so perhaps I should wait until I’ve accumulated a bit more wisdom (or at least perspective) to answer this question.

What do you do when you’re not kicking butt at work?
I love hiking, eating, beaching, hanging out with friends (my friends from high school and I have stayed really close), self-education on the roots of inequality in America, the effects of inequality, and the experiences of whose who haven’t been as privileged as I have.