“Going back to work at Google after a 6 month maternity was one of the most difficult times in my life. I was in agony every day…”

Who or what inspired your career in tech?
In 1999 I fell into tech by being the Executive Assistant to the first VP of Sales for Yahoo Canada. I then moved to Vancouver and got a role with a software company called Seagate Software. I had a quota for the first time and that was it. Once I realized I had targets, it was a perfect fit– very measureable and a great role so early in my career. Once I was in high tech, I was hooked!

What’s been your best hack ever?
Having great help. Working full time and traveling for business so frequently, people always asked me “How do you do it?” My answer– have a nanny you trust like family. There is no other way. Also, using Google Docs helps because it’s so collaborative. I use it in all areas of business and in my personal life! 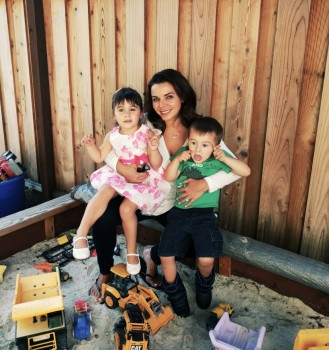 What has been your greatest career challenge and how have you handled it?
Without question, the birth of my twins in 2012. Going back to work at Google after a 6 month maternity was one of the most difficult times in my life. I was in agony every day the first month, but each day it was slightly better. I made a promise to myself to hang in no matter what until the end of the calendar year. By then, it had become much easier… until they turned about 2.5. Once they started really verbalizing how upset they were when I left for work and travel, I had a tough choice to make. After 4 1/2 years at Google (my favorite job ever!), I recently decided to pause and stay home with my kids full time for a while.

What is your biggest career success to date?
Helping a friend who was slated to be in the Navy get hired at Google after he was told he would be un-able to serve in the military for health reasons. Every single time, I have done anything to help a Veteran in the corporate world I feel like I have given back a small but mighty drop in the ocean of service we receive from anyone who has ever served.

If you could go back in time, what’s one tip you’d give your younger self?
Don’t freak out in the first 3 months of any job. Don’t expect you will know at day 2 what you know at day 365. Give yourself a bit of time to learn, ask questions and not think you aren’t performing just because you’re new in a role.

What do you do when you’re not kicking butt at work?
I spend as much time as possible with my husband and 4 kids and try and do as many OTF (Orange Theory Fitness) classes as possible.

Best career advice book?
Multipliers by Liz Wiseman is hands down the spirit of how I manage people and want to be managed. This book is all about letting people thrive and be their best and watching the multiplier effect of encouragement management vs. “beat down” management so prevalent in high tech sales.

Who are the women in tech that you most admire and why?
Sandy Lohr, the CEO of MatchCraft (which is an Ad Tech platform company owned by Media Giant Advance) has been truly inspiring to me over the past few years. She is a CEO in an almost entirely male CEO Google Partner Ecosystem and has been the most engaged, collaborative and risk-taking leader I have had the chance to work with. Her balance of calm and creativity has always impressed and inspired me. Safra Catz is another woman in tech I admire. She is just a tour de force in business and can lead like no one can! Also, Renee James who has pioneered many women’s programs at Intel and is a very inspiring leader in high tech.

What did you love most about your job at Google? What will we see in your next “act”?
A: I absolutely loved the team I worked with. We were in the Small Business sales team and worked directly with Partners who helped small business advertisers use Google Advertising solutions. It was incredible to not just witness but be a shaping part of different industries digital evolution. Watching the directories, and traditional publishers evolve to digital companies was very impactful. My next act? Possibly working for one of the partners that I used to support at Google. I could see working for a smaller company who engages directly with small business advertisers as a perfect fit in the future. We had stellar partners and some had exceptional CEOs that I could learn a lot from.